The Honoka sisters (仄姉妹 Honoka-shimai) are 22 identical clone sisters who pilot guardians. They are 5 years old and have undergone accelerated growth and compressed mental training. They were created in two batches of eleven, with two of them being KIA.

All of the sisters look exactly alike. All of them wear the same female uniform as the rest of the female trainees. They have a slim build and are fairly tall. All of them have chest-length light pink hair styled in a hime (princess) haircut, and have brown eyes. Their clone source is unknown.

En attacked Nagate when he had been checking the safety harness, unaware of the girls' changing room nearby, when she mistakenly believed him to be guilty of spying. En had been part of the retrieval squad consisting of herself, Kunato, Nagate, and Hoshijiro. The squad had been sent out to retrieve a Kabizashi after it had drifted some distance after Akai and his squad were killed by Gauna 487.

She had been unconscious between the explosion that happened because of Tanikaze at the battle against the Chained Gauna[1 1], and the battle against the Asteroid hiding Gauna.[1 2] She had regained consciousness after a very long time, but still harbored resentment towards Nagate after waking up, attacking Nagate when he had accidentally walked into she and Ren photosynthesizing.

She and Ren appear to have feelings for Nagate.

Pilot of unit TS206 or 706. She witnessed the death of her sister Hou at the hands of Benisuzume, and was nearly killed by it herself moments later, only to be saved by Nagate opening fire on it a mere second away from her cockpit being torn open. She gets closer to Nagate after he avenges Hou's death by destroying Benisuzume with a kabi bullet that she originally intended to use herself to kill Benisuzume. She also tries to reason about Nagate to En when the latter still had anger towards him.

She and En appear to have feelings for Nagate.

She died when her cockpit was torn apart and shredded by Benisuzume in one single strike, making her the first Honoka sister to be killed in action. Her death was witnessed by Ren, who nearly shared her sister's fate, and later avenged by Nagate.[1 3]

Introduced as the 22nd Honoka sister. She's from the second batch of eleven, and is considered to be the most skilled pilot among them. Deceased, absorbed, replicated, foamed by a gauna, became aware of the fact she was now a gauna, had complete existential collapse, and finally was mercifully killed by a well-placed shot from the Mizuki during an expedition to the Lem star. As a gauna she (it?) seemed to have retained her entire personality completely, perhaps even suggesting the gauna had created their own hybrid, but whether this was in an attempt to communicate with or infiltrate Sidonia is, like much else to do with the gauna, unknown. 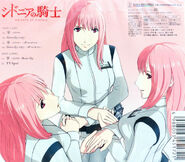 Add a photo to this gallery

Retrieved from "https://sidonia-no-kishi.fandom.com/wiki/Honoka_sisters?oldid=7041"
Community content is available under CC-BY-SA unless otherwise noted.