Izana Shinatose (科戸瀬 イザナ, Shinatose Izana) is the Guardian pilot of Unit 723 and close friend to Nagate. While initially genderless (a third gender individual capable of transforming into the opposite sex of the person they are attracted to), Izana eventually becomes a girl due to falling in love with Nagate. She is the 'granddaughter' of Yure Shinatose, but it is unknown whether or not Izana had any parents as there were no mentions of them or even if Yure herself actually had any children or if Izana is a clone of Yure due to their similar appearance.

Throughout the series it is shown that Izana is a very caring person, helping out Nagate who was shunned by most of the other trainees at the start of the series, by showing him around and befriending him. She is also determined to do her best to protect Sidonia, even when the odds are against her.

Despite being a sort of rival in terms of fighting for Nagate's love with Yuhata and to a lesser extent, Hoshijiro, she still cares dearly for her friends.

It is shown she can get quite jealous whenever anyone else spends some time alone with Nagate, or if when she is spending some time alone with him gets interrupted by someone else. Her jealousy is shown to be most extreme whenever Nagate visits Benisuzume or anything to do with her, always walking off in frustration at the slightest mention of her. She can also get quite frustrated due to Nagate's general obliviousness to all things romantic, but she still loves him all the same.

Initially as a Guardian pilot, Izana has shown no particular prowess in terms of piloting and is usually held back as part of the defense team of Sidonia rather than going out to meet the Gauna in combat like some of the other pilots. Though this eventually changed when she received her artificial limbs, as she is able to integrate herself into the Guardian frame and can detect Gauna from a long range, even further from the Chimera, Tsumugi, who can naturally detect any nearby Gauna. With this, she fights, literally, with her eyes closed.

She is shown to be rather adept in fighting after being able to do so, being fully aware of her surroundings.

Izana has a slim build but a slightly taller stature than other females like Yuhata. She has short black hair styled into a bob cut. She has blue eyes in the anime, and black eyes in the manga.

At the start of the series, due to her being neither male nor female, her physical appearance was ambiguous when it came to deciphering her gender, much to Nagate's confusion. Later on in the series Izana becomes a female, due to her attraction to Nagate. Her body structure changes to a more feminine figure, as in a later scene, she attempts to don her usual flight suit, but as it tries to cope around her newer figure, it shreds entirely, revealing her to be decidedly female. She had grown breasts at this point. which led to her being unable to wear her skinsuit which was designed for her previous anatomy, confirming that she did develop female genitalia at that point.

After a dangerous encounter with a Gauna, she loses her right arm and left leg, and they were soon replaced by artificial limbs. Her right artificial arm has 10 fingers, allowing her quicker response and greater comfort as a Guardian pilot. Izana remarks that the prosthetics feel as if she had always had 10 fingers.

Nagate Tanikaze - They immediately hit off as close friends. Throughout the series they are shown together whenever doing activities outside of piloting, whether it be exploring or just relaxing. Izana developed a crush on Nagate early on, getting jealous when she sees him together with Hoshijiro. Nagate didn't notice, to Izana's chagrin, though this is mostly due to Nagate's general obliviousness toward romance and his focus on eating. She is willing to sacrifice herself to save Nagate, catching him while falling from a Gauna attack and shielding the impact of the crash with her own Guardian despite a high risk of her death. Soon after moving in with him, she becomes a girl due to falling in love with him. At one point, she believed that Nagate was taking her out on a date to a scenic resort under the guise of a mission, while Nagate really thought it was a mission. Izana then confronted Nagate about his feelings for her, however, Nagate's response is unknown as this scene was cut off. It was later revealed that he said he did care for her, yet the extent of the statement, be it care as a friend or as a love interest, remains to be clarified or seen.

Yuhata Midorikawa - Though initially no more than acquaintances, this developed into friendship as they regularly fought each other for time alone with Nagate. Despite being love rivals, they are close friends, Izana even turning to her for help after finding out she turned into a girl. Eventually, Yuhata moves in with Izana and Nagate, along with Tsumugi, and they grow close as friends. As Yuhata became the Commander's Aide, she respects the chain of command and follows her orders well, acknowledging her expertise and intelligence when it comes to strategy. She has faith in her abilities and cheers her on when all seems lost. Even protecting her fall with her own body, during a Gauna attack, which brought Izana herself into a coma.

Tsumugi Shiraui - Like most of the citizens of Sidonia, Izana was wary of Tsumugi initially, though this immediately changed after talking to her with Nagate, becoming best friends with her along with Nagate. Along with Nagate, they even helped Tsumugi explore Sidonia in her probe form, despite breaking the law about it. Tsumugi particularly enjoys her time with Izana's cat, cuddling up to it and finding it adorable, even going so far to sleep with it in her home. Though Izana gets jealous and upset when Nagate spends time working with Tsumugi to the point he doesn't notice her, she doesn't show any animosity towards Tsumugi and still cares for her deeply.

Shizuka Hoshijiro - Like any of the other trainees, Izana didn't hold any animosity towards her, though there weren't many times they interacted but she acknowledged her along with Kunato to be high achieving students. However, Izana is shown to be incredibly jealous of her relationship with Nagate, seeing him together with her causing her to walk away frustrated. Even after death in the form of 'Placental Hoshijiro', Izana's jealousy stretches on, constantly reminding Nagate that she was only a placenta, and getting angry when Nagate visits her more.

Starting to see a pattern here.

Fighting with her eyes closed.

Izana detecting Gauna with her radar. 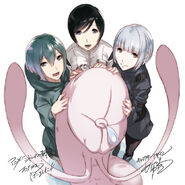 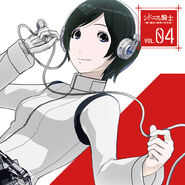