Kanata (かなた) is the fourth chimera created by Ochiai and recent creation of Kunato Developments for fighting against the Gauna. She's the younger sister to Tsumugi Shiraui, but her experimental development made it unstable. Ochiai later removed Kanata's personality and merged his mind into Kanata's body to become the supreme being he always envisioned.

Kanata has a naturally inquisitive nature. Early in her development, she navigates through Sidonia's structure with ease, visiting the women's shower rooms, and exploring the ship. Her explorations even took him to the OSL Lab, where she encountered the remains of his placental mother. Unlike Tsumugi, she is not attached to Nagate, and seems less intelligent than his sibling. This is likely due to an underdeveloped personality, since Ochiai wished to use Kanata as his vessel.

Like all creatures related to Gauna, Kanata has the ability to use placenta to create any number of organs, structures, or limbs she needs. She can live with some or all placenta removed, as long as she has sufficient Heigus particles to recover with.

Like Tsumugi, she is grown on a human frame, showing similar biological structures as humans. Eyes, ribs, legs, arms, skulls, spine, and other human elements are all present in Kanata. She also contains a number of organs that are unique to himself, including a connection to Ochiai's neencephalon device and the Graviton Radiation Emitter.

Kanata was born through the use of the second Placental Hoshijiro, recovered by Nagate during his rescue of Izana on Lem IX. Like the first Placental Hoshijiro, the second was used as the mother to a chimera. While Toha Heavy Industries initially gained control of the placenta, Ochiai managed to have it transferred to his command.

Shortly after recovering the placenta, it was used as the mother of the second chimera, Kanata. Kanata was the subject of the next generation of chimera control: the neencephalon control system. This control system allowed Ochiai (in the guise of Kunato) to impose his will and brainwaves on the chimera, rather than relying on the chimera's upbringing to control it.

Kanata was also the subject of the first Graviton Radiation Emitter. This device, considered impossible to build, was created due to the incredible regeneration and creation properties of placenta. Kanata was grown to house and control this weapon.

Kanata was a curious child, sending her placental probe wandering through Sidonia. As a test bed for the new emitter, her actions were sharply curtailed, and he was ill-prepared for the revelations awaiting her in Sidonia. After seeing her placental mother in the OSL Lab, she lost control and fired her emitter through Sidonia, piercing the outer hull. Only after a control rod was shoved through her brain was she brought back under control.

During Kanata's second outbreak, she was raised to the outer hull of Sidonia, where she began preparations to fire her emitter again. Talked down by Tsumugi, she was killed by a Toha Industries emitter, fired by Mizuki, which pierced her true body. However, this revealed the existence of a second true body within the placenta. This true body housed Ochiai's consciousness, which took over Kanata's remains and escaped.

Assault on the First Assault Fleet

During the Large Mass Union Ship Assault , Kanata appears and attacks the First Assault Fleet. Destroying several Tadugane warships, she is first disabled by a shot to his vulnerable eye, then hit with a direct shot from a Mass Driver Cannon. Heavily injured, she retreats to heal herself.

In the final battle inside the Lem star's danger zone, Nagate Tanikaze kills Kanata by firing into the exposed muzzle of her Graviton Radiation Emitter after narrowly dodging its blast, then finishing Kanata with a shot to his last core in his head. With the Conversion Organ secured, the Graviton Radiation Emitter was able to be powered up, aimed at, and fired at the Greater Cluster Ship to destroy it in the LEM Star system. 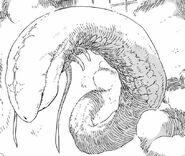