Kobayashi (小林) is the captain of the Sidonia and is one of the only survivors of the first time humanity encountered and defeated a Gauna 600 years ago. Like the Immortal Ship Committee, she is immortal as well, signified by her wearing a mask.

Kobayashi is shown to be rather stoic and rational. She is willing to take great risks to ensure the survival of Humanity in Sidonia, even willingly abandoning pilots or risking destroying a large portion of Sidonia, if it means saving humanity's remnant as a whole.

While she usually keeps to herself and is very professional among her colleagues, rarely displaying any emotion even when in the face of danger, she does have a sort of playful side. Since most of Sidonia doesn't know how she looks like behind her mask, as quoted by Ochiai, she enjoys blending in with the normal crew of the ship. Ranging from being a nurse to being a restaurant clerk. This is apparently a few of her only joys.

During her younger years, she showed great concern for comrades and courage when facing a Gauna, engaging it in battle, even when at the time there was no reliable way of defeating it.

However, it is presumed, that she was much more strict before the start of the series, as it is shown her giving Nagate more freedom then she gave Hiroki, in hopes that Nagate won't rebel one day like Hiroki did. As well as satiating The Immortal Ship Committee's desire for Nagate's death, by placing him in constant danger.

Despite being over 600 years old, she looks very youthful, due to being immortal. She is shown to always don a mask whenever around regular crew members, to the point that no one except for a certain few know how she truly looks like. She has long black hair, and usually keeps it tied in a long ponytail which stretches just past her knees, though it is shown, that she wore it as a bun in her younger years, or when she disguises herself as a regular crew member.

From left to right: Hiyama, Saitou, Kobayashi, and Ochiai 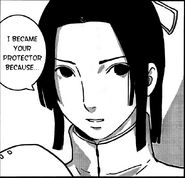 Kobayashi as "Tanaka" the inn keeper

Kobayashi 100 years ago
Add a photo to this gallery

Nagate Tanikaze
Not much interaction is shown between them, however Kobayashi trusts Nagate and truly believes he is Sidonia's best hope for survival. She is his legal guardian, on the pretense that she sympathizes with him in his situation. She is shown to care for him to some degree, even tending to him while disguised as a nurse, whether or not this is any indication of whether or not she cares for him or if she just enjoys doing so remains to be seen. It is most likely she wishes to gain his trust, so that he doesn't rebel against her in the future.
Hiroki Saitou
Being among the few survivors to defeat a Gauna for the first time together and continued protecting Sidonia for 600 years together prior to the start of the story, it is believed the two were rather close. Kobayashi trusts in Hiroki's ability in combating the Gauna and believes he is an important asset to Sidonia. However at one point, her devotion to Sidonia's survival prevents her from seeing Hiroki's distress, and she eventually tried to force him to continue taking the Immortality Medicine for the sake of Sidonia. It is unknown, whether or not she is remorseful about Hiroki's death due to her wearing a mask most of the time, though she didn't show much distress after finding out his fate at the start of the series.
Lala Hiyama
Like Hiroki, Lala, is one of the few survivors from 600 years ago, however not much is shown between them. It is shown that they have an uneasy relationship, not being on friendly terms despite their history together (mainly, because of Kobayashi placing Nagate, as Lala sees it, in undue danger).

In one scene you see Kobayashi bathing naked amongst a lamp. There would be a logical mistake, if the scene was interpreted, as such Kobayashi is photosynthesizing because the first humans able to photosynthesize came with Yure Shinatose after Kobayashis birth. However it is possible she chose to transplant her brain into a clone body that has the ability to photosynthesize.

Retrieved from "https://sidonia-no-kishi.fandom.com/wiki/Kobayashi?oldid=7039"
Community content is available under CC-BY-SA unless otherwise noted.