Lala Hiyama (ヒ山 ララァ Hiyama Rarā) is a human who wears a bear-like life support suit to sustain herself. She's part of the original Immortal Ship Committee, former Gardes pilot, and best friend to former ace pilot Hiroki Saitou; she had a fall out with the committee after Hiroki fought against Kobayashi. Lala is now the dorm mother to new cadets at the SDF dormitory; due to her bond with Hiroki, she took a personal interest in looking after Nagate Tanikaze.

Lala was a part of the original Immortal Ship Committee and a Gardes pilot. However, during a battle against the Gauna, parts of the Gauna's placenta invaded her body, fused with her brain, and destroyed her right arm. While there's no corruption to her personality nor memories, she can't survive outside of her life-support system. Ochiai and medics gave her the ability to interact with her environment by placing her into a large cybernetic life-support suit that eventually became her commonly seen bear-like image with a right prosthetic arm. Usually when a body is that damaged, they have the option for cloning their bodies and transfer their minds to a new body. For unclear reasons (possibly the unique biological damaged she suffered), she remains confined within her suit for over a century.

She was once good friends with Kobayashi, Ochiai, and especially with Hiroki; war changed their personalities and damaged their bonds. Disgusted with the council, she parted ways and became a dorm mother to SDF cadets. However, the status of her immortality and committee membership is unclear. She is at least over 100 years old and still has direct access to see Kobayashi (Captain of Sidonia), but only uses her privilege to voice her concerns and never got involved in council matters.

Hiyama is very rational and kind. She had a close friendship with Hiroki and always lamented how things ended between them. Because Nagate is Hiroki's clone and legacy, she extends a great level of care for him, always making sure Nagate has something to eat, cleans his room, and talks to him often. She happily feeds and cleans for all the cadets on Sidonia without complaining, and assumedly talks to most of them every day.

However, the one consistent way to get under her skin is to call her by her first name, Lala. She would only let Hiroki and Nagate (who to her are the same person) call her Lala. When Izana tells Nagate to call Hiyama by her first name, Hiyama roars angrily and dangles Izana off a balcony with one arm. However, she has never hurt or killed anyone (since she last saw Hiroki).

Hiyama is one of the oldest Garde pilots in existence and was skilled enough to survive the Fourth Gauna War. However, she has not flown a garde in some time and now is content to take care of the Cadets in her building.

Whether she is just strong or if her abilities are enhanced by her life support suit, Hiyama is strong as a bear. When Hiroki stole his clone and was pinned down by security forces, she grabbed a fallen security officer and easily hurled him like a log, knocking down the snipers. She then held off the remaining officers while Hiroki fled with the clone that would become Nagate.

Hiyama's bear suit keeps her alive and has allowed her to live for 600 years.

Whether in her Garde pilot suit or her dorm mother outfit, Hiyama has always appeared as a great bear. She stands much talller than anyone else on Sidonia. Her right "paw" is replaced by a fully functional robotic hand. She says it's never gotten in the way of her work. As a dorm mother, she wears an apron and simple habit. Her Garde pilot suit is modded to allow her bear-sized body to fit. She also seems to have some black formal wear for celebrations or more somber events.

Hiyama and Kobayashi are the only two veteran Garde pilots left since the Fourth Gauna War. She fought Gauna alongside Kobayashi and Hiroki Saitou, and together they discovered the Kabi material in the Artifact. Then when Hiroki began to age and stole the Hiroki clone, she defended him. She then became the dorm mother of the house where Nagate and the other pilots live.

Being the dorm mother Hiyama takes care of the residents but, in particular, Nagate. This is probably because to her, he is just like his "grandfather" Hiroki, her best friend when he was still alive.

Hiroki was for a long time Hiyama's best friend and comrade until Hiroki disappeared with his infant clone. They fought the Gauna together; they are both some of the few survivors of the last time a Gauna breached Sidonia. She looks at Nagate and sees Hiroki (literally). Hiroki was the one person she would let call her Lala, although she lets Nagate call her that at least once.

Hiyama takes care of Nagate, whether he's hungry or when he mourns Hoshijiro. She brings Nagate good food or tells him where he can find some. When he locked himself in his room, she literally just bashed down the door and threw him out so she could clean. She most likely cares for Nagate because in all essence he is the Hiroki she once knew.

Lala's relationship with Kobayashi is a complicated and tense one because of their history. They began as friends and founders of the Immortal Ship Committee. Tensions began after Hiroki abandoned Sidonia. When he returned, Kobayashi went behind Hiroki and the committee's back by cloning Nagate. When Hiroki decided to save his clone, Kobayashi dispatched soldiers against their old friend. Siding with Hiroki, Lala fought against Kobayashi's squad to allow him to escape. Although Lala wasn't severely punished, she never took involvement with the committee ever again and is wary of Kobayashi's intent with Nagate. During missions when Nagate was dispatched, Lala is upset with Kobayashi at the frequency he's sent into battle.

Hiyama mostly speaks to Izana in passing, as she does most of the residents, but she knows them all by name. When she becomes sad at the memory of Hiroki, Izana tells Nagate to call her "Lala". Surprisingly, she reacts to this by mistakenly calling Nagate "Hiroki". But as soon as she learns it was Izana's plan, she throws a fit, roars, and smashes something. When Yuhata Midorikawa investigates the noise, she sees Hiyama dangling the crying, apologetic Izana over the balcony. 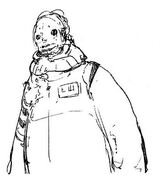 Lala Hiyama in her human form.

From left to right: Hiyama, Saitou, Kobayashi, and Ochiai. 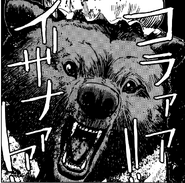 Lala showing Izana, how much of a bear she really is.

The same, but from the anime.