Ochiai (落合) is a scientist and member of the Immortal Ship Committee (who lived centuries before the main events) and was the foremost researcher on the Gauna's behavior and biology. As a scientist pushing the envelope of what was possible, he tried to create a Chimera 100 years prior to main events and nearly destroyed Sidonia. After he was arrested, his body was destroyed but his mind was kept inside a neural interface; his body was cloned and made as an assistant to Kobayashi. Without the original's memories, the clone was used as a medium to reconnect to Ochiai's mind whenever Kobayashi needs to speak with the original; there are three Ochiais (the original sealed mind, a nematode agent, and the clone) with different objectives.

Ochiai was once great friends and comrades to Hiyama, Saitou, and Kobayashi (all part of the Immortal Ship Committee). He was once hailed as a great scientist of his age and greatly contributed to the technological and biological advancements for Sidonia. However, he changed and was later hailed as the great mad scientist instead. Ochiai always believed in biological and technological evolution, but his scope was beyond humanity. He lost sight of his own humanity and modified his body with advanced biological and cybernetic enhancements to the point he no longer resembled his former human self, taking an alien appearance.

In his own quest for bio-technological advancement, he threatened the lives of the people of Sidonia for his own selfish cause(s), and nearly single-handedly destroyed Sidonia. His arrogance and over-confidence in his ability to succeed drives him to push matters to the edge with disastrous results. However, he was eventually arrested and his body was destroyed, but he held half of Sodonia's library in his brain. With the data merged to his mind, Ochiai's knowledge and consciousness were sealed away in an isolated neural interface. Through cloning, another Ochiai was made, one that was a loyal agent to Kobayashi and without his great scientific ambition. Whenever Kobayashi needs the library data from Ochiai's mind, his clone would interface with his mind to dispense the information. Unknown to anyone, Ochiai anticipated potential defeat and created contingency plans of his own; should anyone venture into his sealed labratory, his creations would help him return by taking over the body of another person through his Blood Nematodes.

Serving Kobayashi is a cloned version of Ochiai. Due to limited information, not everything about the clone has been defined. Taking Ochiai's human form, he loyally serves Kobayashi without any degree of treachery nor mad scientist ambitions. It's unclear is this the result from alterations in the cloning process or he didn't have the original's experiences to motivate him to that dark path. However, he is the medium body Kobayashi needs when interfacing with the original's mind. Ochiai's kept half of Sidonia's library within his brain to leverage his survival. Whenever Kobayashi needs to access the missing data from the library, the clone sits with a neural interface that temporarily merges his mind into the clone to talk. For brief moments, the clone becomes the true Ochiai, but returns to his clone's kind and loyal persona after disengaging from the interface.

Before Ochiai's rebellion, he anticipated he might fail and created the Blood Nematodes as his failsafe. Containing a copy of his mind and personality, the nematode remained dormant within his sealed lab until Norio Kunato opened it. As soon as Norio entered Ochiai's Lab, a nematode parasitically took over his mind and Ochiai's personality became the dominant persona in Norio's body and made him the successor of Kunato Developments. Utilizing Norio's influence over the company, he convinced the higher-ups of Sidonia that Norio has since rediscovered and improved the developed bio and technical knowledge of Ochiai that no one else could figure out. Because Sidonia was desperate for advanced developments to defend Sidonia, nobody suspected Norio's sudden increase in intelligence and unusual deep insight into Ochiai's work. Through Sidonia's complacency, Ochiai was able to resume his Gauna chimera-hybrid experiments and created Tsumugi Shiraui. When he made Norio and Kunato Developments the premiere company for future advancements, he had greater freedom to develop Kanata. After believing he ironed out all the problems he had with his previous experiments, he thought it was time to stop the ruse and even gave up Norio's body and took over Kanata's to openly rebel against Sidonia once again. With his will over Kanata, Ochiai is now one of the most powerful and almost unstoppable beings between Sidonia's unending conflict with the Gauna. Despite having centuries of experience and an advanced mind, Ochiai never learned from his mistakes and always underestimated those around him. It's because he underestimated Tanikaze that resulted in his defeat again.

Ochiai began life as a normal member of the Sidonia's crew. As time went on, he became an advocate for body modification, swapping out his body parts with bio-tech enhancements. As of 400 years after Sidonia launched, his body modifications progressed to the point where he could survive in the vacuum of space without a suit.

100 years before main events, Ochiai concluded that the Kabizashi is luring the Gauna and tried to convince Kobayashi to get rid of them. However, Kobayashi didn't agree and felt his findings inaccurate. Feeling Ochiai has gone too far, she declared his chimera experiment and labs to be dismantled. Ochiai's work was the only thing that mattered to him. Without it, he lost all fealty to Sidonia and decided to rebel. Merging with his Chimera, Ochiai jettisoned all the kabi and fired upon Sidonia. Flying out in space within his Chimera, he appeared before Kobayashi (at the command center) and reminded her the kabi is drawing the Gauna. Ochiai declared he's leaving Sidonia and unlikely to return while the ship is in immanent danger from a Mass Union Ship; Hiroki Saitou (in Tsugumori) held his garde team behind and retrieve the kabi while he and Lala tried to talk him out of things. It was then the mass union ship attacked with Gauna and Ochiai lost control of his chimera. In the four minutes it took for the kabi to be located and returned, 99% of the ship's population had been consumed by the Gauna. In preparation for retaliation, Ochiai had taken over half of Sidonia's library hostage in his augmented brain. After he was defeated, Ochiai's brain was removed from his body by Yure Shinatose (Izana's grandmother). However, Ochiai's brain had to be used to access the library data; his brain lived on but sealed within a secured neural interface. Ochiai can only sporadically come back whenever Kobayashi needs information from him. A clone was made as a loyal servant to Kobayashi and a means to link Ochiai's mind to his body for accessing information; he never escaped. While his original mind remains locked away, a remnant of his survives.

Ochiai created several Blood Nematodes in preparation for his punishment. Each blood nematode contained his core personality and memories, allowing him to take over another person's brain and willpower by force. After Norio broke into Ochiai's lab, he became the unwilling host to Ochiai. Using Norio's identity, (nematode) Ochiai became the successor to Kunato Developments. Restarting his chimera research and creating new chimera experiments to his own ends, he convinced Kobayashi he had a breakthrough with Ochiai's work and took the company to new heights.

After the successful creation of Tsumugi and proving her combat value to Sidonia, Kobayashi gave Norio and his company more resources to create a second chimera: Kanata. However, a child-like mind with great power, Kanata has proven himself unstable and caused problems to Sidonia. After the second time Kanata ran out of control, Ochiai was able to assert dominance over the chimera and became the new driving force behind the chimera and its immense power. The nematode eventually leaves Norio and takes control of Kanata. Repeating his same failure a century earlier, Ochiai faces Nagate in combat and lost. Along with Kanata, Ochiai was incinerated by the nearby star's heat and defeated by Nagate.

Although it seems the remnants of Ochiai are all destroyed, his brain and clone remains in Sidonia. In the aftermath of colonizing the Lem System, Ochiai faded into history once again. After a decade of colonization, certain Sidonians stayed at the Lem System while others decided to venture out again with Sidonia to find new habitable worlds. Under the presumption Ochiai's brain still resides within the neural interface, both his mind and counterpart clone continues to serve Sidonia in future ventures.

From left to right: Hiyama, Saitou, Kobayashi, and Ochiai. 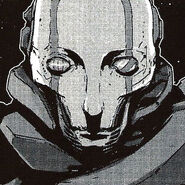 Ochiai's face about hundred years before the main story.
Add a photo to this gallery

Retrieved from "https://sidonia-no-kishi.fandom.com/wiki/Ochiai?oldid=7345"
Community content is available under CC-BY-SA unless otherwise noted.