Shizuka Hoshijiro (星白 閑 Hoshijiro Shizuka) is a fellow Garde Pilot who Nagate Tanikaze meets early on in the story, becoming one of his earliest friends along with Izana.

Hoshijiro is shown to be rather kind to her companions, even to Tanikaze who was shunned by most of the other trainees.

It is also shown that among the other female trainees, she appears to be rather mature, as she doesn't like seeing her friends fighting amongst themselves and would try to calm them down.

Like Tanikaze however, she seems to be oblivious to the feelings of others when it comes to love, and unlike her 'rivals', she doesn't appear to be aware that they like Tanikaze as well.

As a Garde Pilot, not much is seen in terms of her own prowess, but it is suggested that she is among the best in her trainee batch, as she was selected along with Kunato, and Tanikaze to retrieve that lost Kabizashi spear. It was also shown in the VR Simulator scoreboards, she is ranked overall 2nd, right under Kunato.

It is also believed that she is fully aware of all the Garde's typical strategies when encountering a Gauna, as Benisuzume is capable of fighting the other Gardes effectively and being able to dodge their attacks almost seamlessly, since the Gauna are capable of absorbing whomever they prey on, it is believed that her knowledge in fighting is what made Benisuzume a dangerous adversary.

Like most of the other trainees, Hoshijiro wears the same female uniform as the rest and has chin-length thick black hair, styled into a page boy cut. She has black eyes in the manga, and brown in the anime.

Hoshijiro was a pilot trainee when she first encountered Tanikaze. As a fellow trainee, she showed compassion when many others despised or made fun of Tanikaze. Most other trainees made jokes or teased Tanikaze about his smell, while Hoshijiro remarked, "... You don't smell," even after Tanikaze had thrown up in the nurse's office.

After Tanikaze willingly disregards orders not to chase after her life pod, her attitude begins to change. No longer just a fellow trainee, Tanikaze becomes a possible love interest for Hoshijiro. When pulled between Izana, Yuhata, and Hoshijiro, Tanikaze ends up with Hoshijiro in the deep-sea submersible. They share a tender moment before an alert pulls both back to reality - and the Gauna.

Hoshijiro willingly sacrifices herself for Tanikaze after the Gauna wraps Tanikaze and Tsugumori in its placental tentacles. Fighting to save Tanikaze, her Garde is ripped apart, and her body is pulled into the maw of the Gauna.

After sacrificing herself to save Tanikaze, she is reincarnated as 'Placental Hoshijiro' and Benisuzume, a Gauna that retains her form when fighting, and is considered among the most dangerous of Benisuzume types, oddly enough, this doesn't happen when any other pilot is consumed by the Gauna. Though her death itself proved to be a lasting trauma on Tanikaze.

The repeated recreation of absorbed humans by the Gauna is psychologically taxing on humans, in this case Tanikaze, and repeatedly made him hesitate when fighting. Eventually this became no longer a problem as Tanikaze fixed his resolve on the fact that Benisuzume is not Hoshijiro.

It is implied that her memories and personalities can live on through the reincarnates, but are buried deep down and only resurface for a moment when Benisuzume is nearly defeated.

While currently defeated, it is unknown if Benisuzume will reappear once more.

However it is also implied that Chimeras that are born from Placental Hoshijiro retain some of Hoshijiro's personality, such as in the case of Tsumugi Shiraui and her closeness to Tanikaze. 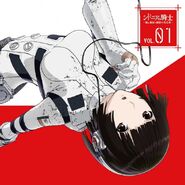 Hoshijiro Water
Add a photo to this gallery

Retrieved from "https://sidonia-no-kishi.fandom.com/wiki/Shizuka_Hoshijiro?oldid=7269"
Community content is available under CC-BY-SA unless otherwise noted.